50 years since the Summer Olympic Games – the programme

The 1972 Summer Olympic Games were a significant contributing factor to Munich’s current reputation as a modern, charming metropolis of culture and sport. Here you will find the most important sports and cultural events for the anniversary and great videos from then and now!

From January to December the 1972 Olympics will be everywhere

Museums and institutions all over Munich will spend the whole year hosting exhibitions and events centred on the 1972 Summer Olympic Games, across the areas of design, art, culture, architecture and sport. A fantastic cultural programme is also planned for the city’s theatres and concert halls.

One special project ensures the twelve victims of the 5 September 1972 terrorist attack on the Israeli team will not go forgotten. Under the auspices of the Jüdisches Museum (Jewish Museum) and in cooperation with the NS-Dokumentationszentrum (Munich Documentation Centre for the History of National Socialism) and the Consulate General of Israel, one of the victims of the attack will be commemorated each month of the year, with a variety of activities dedicated to their memories.

The full programme for the 50th anniversary celebrations of the 1972 Munich Olympic Games can be found at:

Super Bloom Festival on 3 and 4 September

The Super Bloom Festival in late summer will feature a whole series of internationally renowned headliners. Superstars such as Calvin Harris, David Guetta, AnnenMayKantereit, Macklemore, Kraftklub, Rita Ora and local heroes such as Labrassbanda will be performing on stage in the Olympic Park. In addition to the band performances, there will be art installations, talks, dance performances and much more at numerous stations around Lake Olympia.

Throughout the anniversary year, the City of Munich will be offering an extensive range of tours led by its official guides. Most of them unfortunately in German. One special tour takes visitors through Olympiapark by rickshaw (only in German), where the driver-guide will point out many architectural and design highlights along the way – a wonderful idea for a leisurely solo tour or a cosy exploration for two. The expert guide will share exciting details of the park’s history and recount anecdotes about the City of Munich’s application for the Olympic Games, the creation of the park and its sports facilities, the special atmosphere during the Games and how the newly-built facilities were used after the Olympics.

The Olympic Village Hood Love guided tour (only in German) offers the opportunity to discover where the athletes stayed during the Olympic Games. This accommodation has since become home to many Munich locals, as well as students from all over the world. The apartments of the former men’s village and press centre tower like mountain peaks behind the colourful apartments of the “Olydorf”, as the village is known.

It was intended to be an oasis of peace but also a place for lively interaction between nations. Pictures of the Olympic Village grabbed the attention of the whole world as the terrorist attack of 5 September 1972 unfolded there. On this guided walking tour, you will find out about life and the atmosphere here during the Games, but also the creative sense of togetherness and the way its residents now identify with this special place.

You can also set out independently to tackle your own cycling tour of famous and lesser-known venues used during the Munich 1972 Olympics. Covering approximately 38 km, the tour travels from the Olympia-Reitstadion Riem (equestrian stadium) through Englischer Garten to Olympiapark, then to Dantestadion and Schloss Nymphenburg (Nymphenburg Palace) and finally along the Regattastrecke (regatta course) to Oberschleissheim. No need to skip that famous Munich hospitality on this trip, as the route includes a stop at the beer garden beside the Chinesischer Turm (Chinese Tower). You’ll find a detailed description of the cycling tour here.

Visitors can take a cross-city trek at any time of year and enjoy a wealth of nature and cultural experiences along the way. This route takes walkers from BMW Welt in the north of the city to the Olympic Village and then through Olympiapark to the lake at Hinterbrühl, far to the south. The handy komoot touring app can be used as a guide along this walking route. You’ll find a detailed description of this city walk here.

The full programme for the 50th anniversary celebrations of the 1972 Munich Olympic Games can be found at:

A quick look back to the Summer Olympics Games

On 28 October 1965, Willi Daume, then President of the National Olympic Committee, asked Munich’s Lord Mayor at the time, Hans-Jochen Vogel, for a private meeting at the city’s town hall. The official had a real surprise in store. The good news was that Munich had a genuine chance of becoming the venue for the 1972 Summer Olympic Games. The bad news was that the city would need to submit a viable concept by the end of the year.

After taking three days to think it over, Vogel agreed. The application was submitted two months later. And just half a year after that, on 24 April 1966, something happened that no-one had considered possible: “The games are awarded to Munich” – in Rome the decision of the IOC (International Olympic Committee) was delivered, that Munich had seen off competition from Detroit, Madrid and Montreal to secure the Games. The decision brought transformations in record time, as the mountain of rubble on the site of the former Oberwiesenfeld airport was moulded into Olympiapark, complete with sports facilities, and transport routes across the entire city were whipped into shape.

The philosophy of the 1972 Summer Olympic Games

On 26 August 1972, German President Gustav Heinemann opened the Games. There were two main things people hoped the event would achieve: first it should help to progress the development of the city. Indeed, this wish had already come true by the time of the opening ceremony. The awarding of the Games to Munich had brought with it urban development on a scale the city had not seen since the time of King Ludwig I.

The other hope was that the Games would prove to be a cheerful event held in a tolerant country. With 27 years having passed since the end of the Nazi dictatorship, people were eager to project the image of a peace-loving Germany that had returned to democracy. From the transparent tented roof structure designed by architect Frei Otto and the visual design identity of the games created by Otl Aicher, to the unarmed police officers accompanied by dachshunds instead of Alsatians, every element of the Games was intended to demonstrate this transformation. Not a single prohibition sign could be found anywhere in Olympiapark.

The mood during the first week was wonderfully peaceful and cheerful. The people of Munich were subsequently honoured as the fairest audience in the world by the IOC with the Olympic Cup – the highest Olympic honour that can be bestowed. Munich relished its new role as host to the entire world – which is how things should have continued until the end of the event. Sadly though, the cheerful games were abruptly brought to a terrible end with the terrorist attack on the Israeli team that took place on 5 September. Since 2017 Olympiapark has been home to the “Einschnitt” (“incisions”) memorial site, a permanent monument commemorating the victims of the Munich 1972 Olympic attacks.

Olympiapark or “Olypark”, as it is fondly called, has become very dear to the hearts of all who live in and around Munich. It is hard to believe that the park is already celebrating its 50th birthday. The light and airy tented-roof architecture of its sports facilities still looks so modern today.

Munich’s Olympiapark is a shining international example of how to create a successful legacy for Olympic facilities. The fact that the Olympic grounds are still so full of life is thanks to sustainable planning and use, 50 years before the word sustainability became popular. Now is the time to celebrate this in a fitting manner.

Hotels and accommodation establishments, shops, indoor and outdoor catering, and also clubs and discos are open. However, restrictions apply. All other important information on the coronavirus and your stay in Munich can be found here.

Spirit of '72
For the anniversary

50 years since the Munich Olympics: of course the city is marking this special anniversary in appropriate style 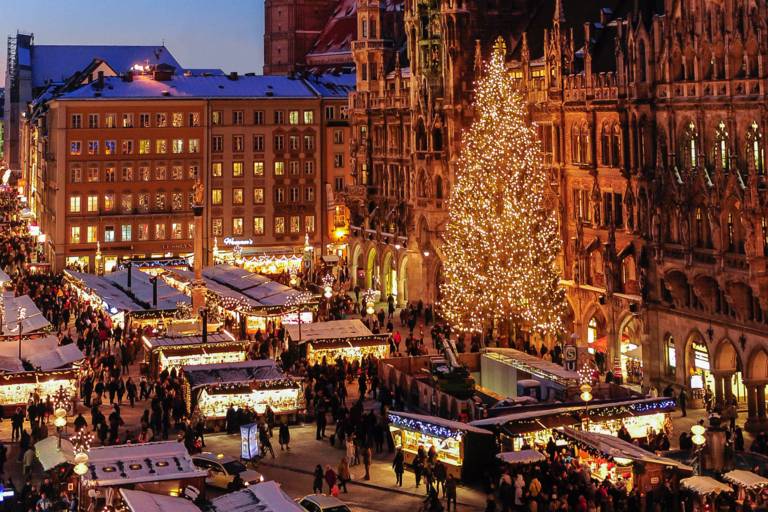 Exclusive tour through the town hall

Explore the Neue Rathaus on Marienplatz with an official City of Munich tour guide. A visit of the famous law library is also included!

Explore the Neue Rathaus on Marienplatz with an official tour guide. A visit of the famous law library is also included!

Magistrates, Monachia and magnificent celebrations: explore the Neue Rathaus on Marienplatz with an official City of Munich tour guide. A visit of the famous law library is also included! 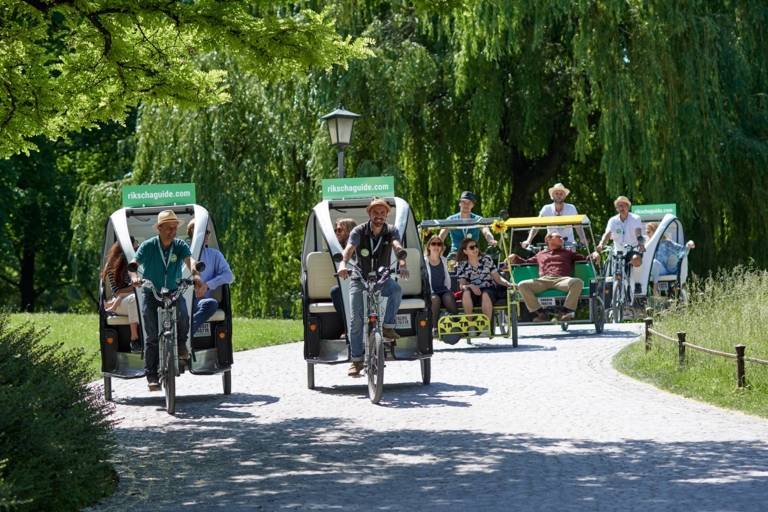 Pedicab tour through the old town and nature

Enjoy this special tour and pedicap ride past all the famous sights of Munich's old town and into the Englischer Garten.

Enjoy this special tour and pedicap ride past all the famous sights of Munich's old town and into the Englischer Garten.

We look forward to seeing you again in Munich. Our tip: the exclusive travel package with Munich Card and Tower Ascent.

We look forward to seeing you again in Munich. Our tip: the exclusive travel package with Munich Card and Tower Ascent.