"Out and about with..." Christian Hundertmark

A walk through Westend: Christian Hundertmark

Colourful, traditional, diverse – Munich’s city districts. “Out and about with...” offers very personal insights through the eyes of the people who live here and who know their districts best. This time: Christian Hundertmark shows us around his Westend.

With the beginning of industrialization, the Westend attracted mainly workers as residents and soon had the reputation of a run-down slum or "Glasscherbenviertel". Today, people originating from some 25 nations live here together, making it a hugely multicultural district that offers incredible culinary diversity. Munich native Christian Hundertmark is one of many who live as well as work in this neighbourhood. As a designer rooted in the urban art movement, his work used to take him all over the world; today he is taking an autumn afternoon stroll through the neighbourhood with our author.

Once a run down area, today it hosts a lively mix of craft businesses and the modernising influence of young people. At the same time, gentrification is snapping at its heels. How would you describe the status of this neighbourhood at the moment?

I am probably part of the gentrification – after all, the artists generally come first, followed by the design studios and then the families. (Laughs) No, joking aside: people have been saying for 10 years now that Westend is the next big thing, but I think it’s all going to calm down around here – not least because it’s not as close to the city centre as Glockenbachviertel, for example.

What do you most notice when you walk through the streets? What do you like about the neighbourhood?

That it’s so untypical of Munich! Especially here where our studio is, I feel that the building and its surroundings are probably the most multicultural place in the entire city. Our loft is on Heimeranplatz in an old, listed factory building. It should really have been demolished because it started falling down in places – though that’s no problem for us designers, artists and architects. The building also houses a mosque, so sometimes we have crowds of 200 Muslims filling the inner courtyard – that’s very exciting! There are also various dance studios, so you can hear the sounds of techno, salsa and even scream therapy sometimes. (Laughs)

Let’s talk about your work for a moment. You do so many different things, though all of them have a creative core.

I studied communication design and I have been working independently for 20 years. Nowadays I make my living as a designer, but my background is in graffiti and urban art. So art has always had a hold on me. It has become more a part of my life again in recent years, so these days I split my time between design and art, which gives me the opportunity to work on some really beautiful projects such as books, magazines and posters. I also do regular exhibitions.

Do you draw inspiration from the city, for example when you’re out walking, or does it come from somewhere completely different?

If you walk through the world with your eyes open, you find inspiration everywhere. When I take my dog for a walk, I’m quickly struck by great ideas – whether I’m in the forest or just walking around the block. But of course, I am also inspired by other designers and all those who work here in the office with me.

We’re just about to head off on our walk through Westend. What are the first places we’re going to visit and why did you choose them?

Funnily enough, the first one is right beside you! Christian points to a big, beautiful bouquet of flowers on his desk. We are going to start at a small florist’s just around the corner where I often go to buy flowers. And cuisine in Westend is really leading the way right now...

An hour later we are standing in front of a launderette, and spontaneously decide to take our second photo inside.

It smells like fresh laundry here! A lovely launderette...

...that I’ve never been inside even though I’ve been living in the neighbourhood for seven years!

Before we got to Las Flores, the florist, we looked at the little pub Bei Gisi. I’ve never been inside, but I must go there soon! It’s a proper Boazn (local pub), where you can even still get a Goassnmass (a cocktail consisting of beer, cola and cherry liqueur). Then we passed Opson, a really lovely modern Greek restaurant, and another hidden gem not far from it: Pâtisserie Amandine, where you can get little tarts, croissants and even home-made bread. Then we saw König vom Westend, a classic kebab restaurant!

Do you think it lives up to its name?

Yes, absolutely – though there are two other good ones in the neighbourhood. You can get a little art fix near the Lohner & Grobitsch café, as it’s beside the Endlose Treppe (Endless Staircase) piece which is not for climbing. On Gollierstrasse, we passed an old comic shop, Comics N’ more, and we are now sitting in this launderette on Parkstrasse.

As we walked I noticed that Westend has an exciting aesthetic on account of the varied influences that are reflected in the architecture here. And the people seem very diverse as well. Would you agree?

Yes, it’s totally mixed. The neighbourhood doesn’t look polished, though you do meet a few business types. And you can often see unique looks on the street here.

Let’s have a quick-fire questions round! Just say whatever comes into your head first. Beer garden or bar?

Bar. I hardly ever drink beer. Although I do find beer gardens lovely in themselves.

Cabaret without a doubt. Opera may be good for giving people the impression you’re cultured, but I’m not really a fan. However, I do really love the billboards above the opera house – my colleague Mirko makes them!

BMX, because that’s what I grew up with. That’s somewhat true of skateboarding too, but BMX came first.

Is there anywhere around here where you can do one or both of them?

Countless places! There’s a skate park on Theresienwiese, one on Heimeranplatz and in Hirschgarten park as well. And there’s one at the Feierwerk cultural centre too! There are loads more still within a radius of two kilometres. Once upon a time I would have been keen to have a go myself, but these days I’m there because of my daughter.

I’d say Butterbrezn because I eat very little meat these days, though I did recently have a really delicious Leberkassemmel!

Sum up Westend in three words?

That is a really wonderful combination!

I know, right? And you can change it around as you please and say: hipster, grubby and a little bit charming! Oh, that is the perfect slogan for Westend! Three component ingredients that make the neighbourhood so unique.

Finally Christian: do you have an exhibition or some other event coming up that we can recommend?

Yes! But not in Munich. I sometimes work with a friend and we collaborate under the name “Layer Cake”. Our exhibition, which is open now and until the end of the year in the Urban Nation museum in Berlin, has brought together artists from all over the world. We’re currently working on taking the exhibition to L.A. or alternatively Tokyo – and it’s looking good for both.

Cool! Thank you so much!

Our author meets interesting Munich residents for a walk through the neighbourhoods.

Discover
Out and about with ... 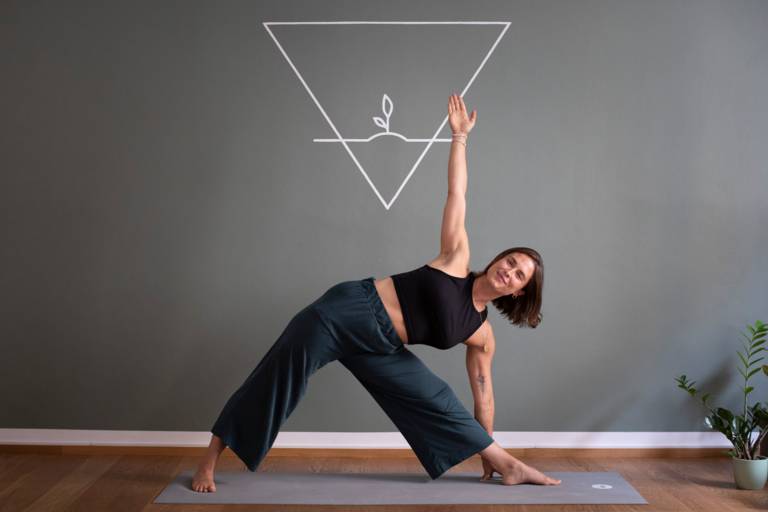 A walk through Lehel: Sinah Diepold 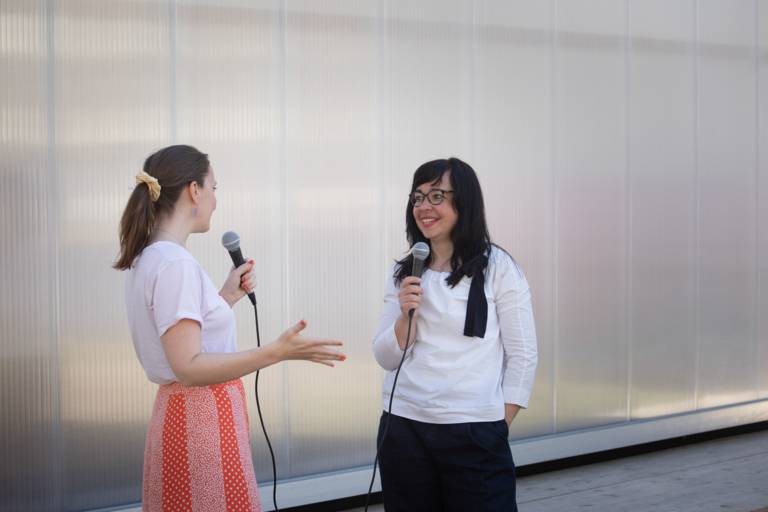 A walk through Kunstareal: Laura Schieferle

A stroll through the Werksviertel with Loomit

A walk through Glockenbachviertel: Saskia Diez 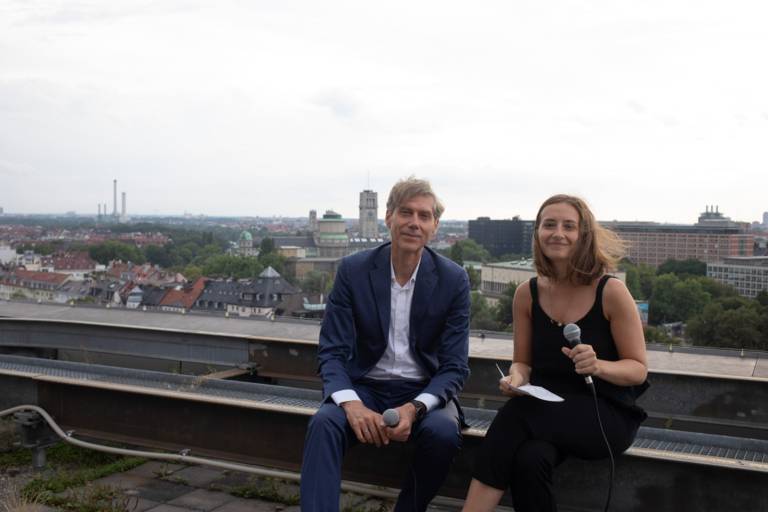 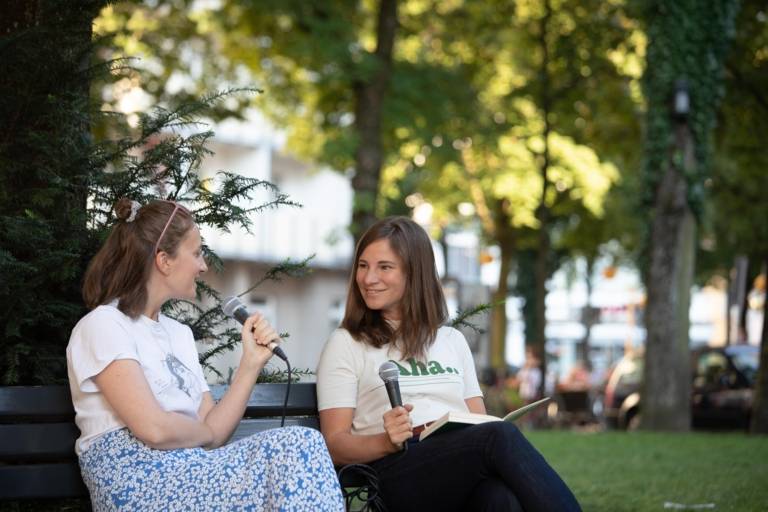 With Nina Sahm through Giesing

See you in Munich
High up

Finally open again: The Tower of the New Town Hall. From the Alte Peter to the Frauenkirche, you can see all the important sights of Munich.