Cool and fresh, chestnut brown, and a little sense of longing: autumn and the city of Munich are naturally perfect partners.

Objectively, autumn is beautiful everywhere - but it's most beautiful in Munich. Where else would you find such an excess of a folk festival dedicated solely to the month of October? What other city can offer such an international salute to this season? Even though the Oktoberfest itself is hardly melancholic, during this time there's not just a Zeppelin over the city, but a very particular sense of longing too.

However, this year the people of Munich had to do without their Oktoberfest, but they are also meeting this loss with a mixture of typical Bavarian pragmatism, longing and excitement for next fall.

Everyone in Munich, whether they love the Oktoberfest or not, is familiar with those delightful days at the end of September when stable high pressure keeps an infinitely blue sky stretching far across the Theatinerkirche (church). No other colour sets off the traditional Wittelsbach yellow so perfectly as an autumn sky!

There's a refreshingly cool scent in the air in the mornings, from the first snow that has fallen in the mountains and the leaves that have dropped overnight. In the afternoons, it's warm enough to dip your toes into the Isar river, and in the early evening, you can simply pick a few chestnuts as you make your way home in the twilight. Carrying a fresh chestnut in your coat pocket is said to bring happiness.

Incidentally, chestnuts are not just part of the city's beer garden decorations. It can't be a coincidence that they are exactly the same colour as a large pretzel at the Oktoberfest.

Incidentally, chestnuts are not just part of the city's beer garden decorations. It can't be a coincidence that they are exactly the same colour as a large pretzel at the Oktoberfest and as the smoothly polished seats on the old Munich trams that occasionally still jangle around the corner. These are three key elements of what makes the Munich feeling come together in the autumn.

The long and generally stunningly beautiful autumn is also ideal for the not exactly small group of Munich residents who spend all year saying "We must get out to the mountains!" but have somehow never managed it - damn!. First, there was "still too much snow", which segues seamlessly into "much too warm for a walk". But in September and October there are no excuses. Quite the opposite – at this time of year the great playground between the Chiemsee (lake) and the Zugspitze (mountain) is particularly beautiful.

When the Kirchweihdult (fair) on the Mariahilfplatz (square) is dismantled at the end October, the city's fountains get their wooden cladding and the white and blue fleet that plies Starnberger See (lake) is anchored in the harbour, it's time for the second half of autumn to begin.

Not a day goes by when you're not bombarded on all sides with images of brightly shining maple leaves on the ground and pumpkins by the side of the road. Why, we think to ourselves, do we always make the mistake of using up our summer holidays in August rather than during these golden October days? Next year, for sure!

When the Kirchweihdult (fair) on the Mariahilfplatz (square) is dismantled at the end October, the city's fountains get their wooden cladding and the white and blue fleet that plies Starnberger See (lake) is anchored in the harbour, it's time for the second half of autumn to begin. Even that has its benefits as the city finally enjoys some peace. Fewer tourists, fewer convertible car drivers, the large play areas become parks again and the Isar is a quiet Alpine river once more.

And as you stroll across the warmly lit Viktualienmarkt (food market) in the late afternoon to see whether there are any wild mushrooms left, you may just walk into a wall of fog just to the left of the Karl Valentin Fountain. And when you emerge on the other side, winter will suddenly have set in.

Also interesting: Tips for each month can be found here.

The City of Munich is also affected by the nationwide measures to contain the coronavirus. The good news: hotels and accommodation establishments, indoor and outdoor gastronomy and shops are open again. All other important information about the coronavirus and your stay in Munich can be found here. 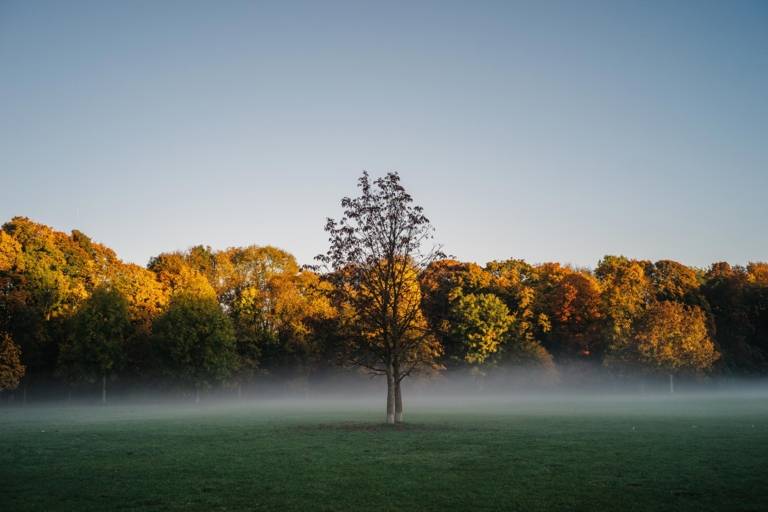 The tower is back: discover Munich's highlights from a very special perspective after just a few seconds in the lift!