Günter Werner hasn’t missed a single day of Oktoberfest in 60 years. A conversation about Munich togetherness, beer baptisms and being unfaithful.

Mr Werner, you were 16 when you first attended Oktoberfest in 1959, and you were in the Schottenhamel tent – fondly known as the Schott’n. Were you even allowed to drink beer then?

In those days, youngsters like me had to be out of the tent by 5 pm, although because I was with my father and his company, I still managed to get the odd sip of beer here and there. I couldn’t have drunk much more anyway back then. In that year, a litre of beer only cost 1.90 DM!

60 years later I assume you can now hold your drink and that you’re a few euros poorer.

On the Anstichtag (opening, or tapping day), I can manage eight or nine “mass” [a mass is the traditional Oktoberfest measure for beer, equal to a litre]. My table is just a few metres away from the Anzapfbox (tapping box), where the Lord Mayor officially opens Oktoberfest – so I am right there at the source! My beer mug is barely empty before Beppo or Lina has refilled it.

"What makes Munich’s Oktoberfest so special for me? The interaction. Being together. Community. As we say in Munich: Hoit ma zam! (Let’s stick together!)"

What makes a good Oktoberfest server?

Keeping it flowing. I have encountered seven or eight servers in my time; a decent one can carry at least twelve one-litre steins. One year there were a few students helping out, but those girls couldn’t even carry four steins – which is nothing!

What is your tip for avoiding a pounding Oktoberfest hangover?

How did you end up on the legendary Stammtisch 180 among celebrities in the Schott’n? [A “Stammtisch” is a table reserved for true regulars – a traditional feature of German inns]

Ever since I was a child I’ve been good at organising things. When I heard that Diana Sandmann, former partner of the legendary footballer Franz Beckenbauer, was planning to give up the table, I immediately snapped it up for my family. Now my name plate is at the head of the table and Christian [Schottenhamel, one of the hosts of Oktoberfest] reserves the table automatically for me – I take Auszogne doughnuts and bacon to his office throughout the year to thank him.

At the end of the ‘80s you even had your own telephone line at the table!

I got that put in when I was working so that customers would be able to reach me. In fact my plumbing company used to practically be run from table 180 during Oktoberfest; only the regular servers, one friend and I had the key to the green rotary dial telephone. Many of our business partners would also be sitting at the table with us as well – business flows well if you have a few beers together.

"I haven’t missed a single day of the Wiesn so far ... my friends will push my wheelchair into the tent if it comes to that – we have already arranged it."

16 days on the Wiesn every year for 60 years adds up to over two and a half years spent at Oktoberfest. Was that something you seriously set out to do?

Yes of course! Before I retired, I would be there with my plumbing company from 2 pm until closing. I arrive a bit later or leave earlier these days. And now I prefer to ride the Ferris wheel over the Teufelsrad [the “Devil’s wheel” is a famous Oktoberfest ride where groups of visitors must try to stay on a round platform as it spins increasingly quickly]. I haven’t missed a single day of the Wiesn so far.

I always get vaccinated and healthy in advance. And anyway, my GP also sits at the same table as me.

Are you ever able to escape requests for a seat at your table?

It’s already started ringing in my ears: “Günter, we want to come too, we want to come too!” But I like that – I enjoy having a crowd of people about me; maybe because I’m an only child. There’s always something going on at my home in Pullach too. An Oktoberfest table is like a promise to meet again. But if a person is only getting in touch with me so they can get into the tent, they can forget about it.

What makes Munich’s Oktoberfest so special and unmissable for you?

The interaction. Being together. Community. As we say in Munich: Hoit ma zam! (Let’s stick together!) In times like these especially, that sense of togetherness is so important – and that’s what the Wiesn has always represented. Everyone squeezes up and makes space if someone else wants to join the table. That’s how I got to know Florian Silbereisen [a German musician and TV presenter] – and my first wife too!

The Schottenhamel tent is the oldest of all the Oktoberfest tents. Will you stay faithful to it?

I already cheat sometimes. I might head to a stammtisch in the Augustiner tent or one of the traditional tents of the Oide Wiesn since that has been going. That said, none are as significant for me as the Schottenhamel. I have experienced a lot there. After the opening of the border in 1989, from 8 pm modern hits were played in the tent for the first time. Previously there had only been brass band music but the young people from East Germany stormed the tents, and the Schottenhamel has been the young people’s tent ever since.

"I wear my father’s deerskin lederhosen, which are a hundred years old. They are still quite loose at the front – there’s room for a few beers."

You must also have been there in 1980, for the bomb attack on Oktoberfest?

The attack happened after ten o’clock at night, and I was already on a tram, heading to the "Park Café" with friends. We heard a loud bang – but it was the next day before we read the news and found out where the noise had come from. After that happened I felt a bit nervous going into the tent. But something can always happen – you can’t let it get in the way of enjoying life.

Before traditional costume became the prevailing Oktoberfest dress code, most Munich natives would wear jeans and a shirt to Oktoberfest. Did you?

I’ve always dressed up for it. The braces on the lederhosen I wore as a child got badly frayed from my sucking on them. Now I wear my father’s deerskin lederhosen, which are a hundred years old. They are still quite loose at the front – there’s room for a few beers.

Do you shudder when you see guests wearing dressing-up versions of traditional costume?

Well it’s not always beautiful, but it doesn’t hurt anyone. I find it more upsetting to see so many more people looking for fights for no reason and throwing their mugs around.

It’s been common for some years now to see the younger generation binge drinking at the Oktoberfest ...

Terrible. It’s meant to be enjoyed. There is one clear rule at my table: no standing on the bench. Otherwise you end up tipping your stein, spilling good beer, giving the wife a foamy beer baptism, and ensuring nobody can chat comfortably. A complete mess. I’ll have to draw up a strict contract about that for when I die!

Who will inherit your table?

My son-in-law and my three stepsons are diligent Wiesn-goers, and they really love it. But they have a while to wait yet: my friends will push my wheelchair into the tent if it comes to that – we have already arranged it.

Due to the coronavirus major events cannot take place until at least 31 August. The Oktoberfest has also been cancelled for this year. All important information about the coronavirus and your stay in Munich can be found here. See you soon in Munich! 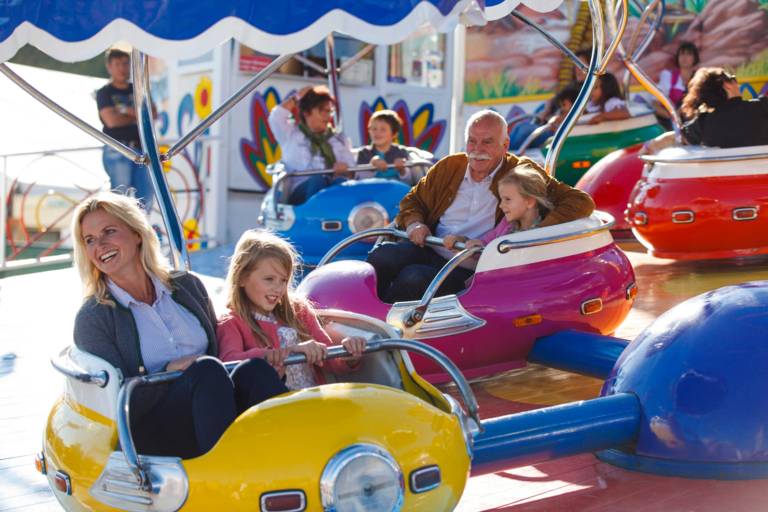 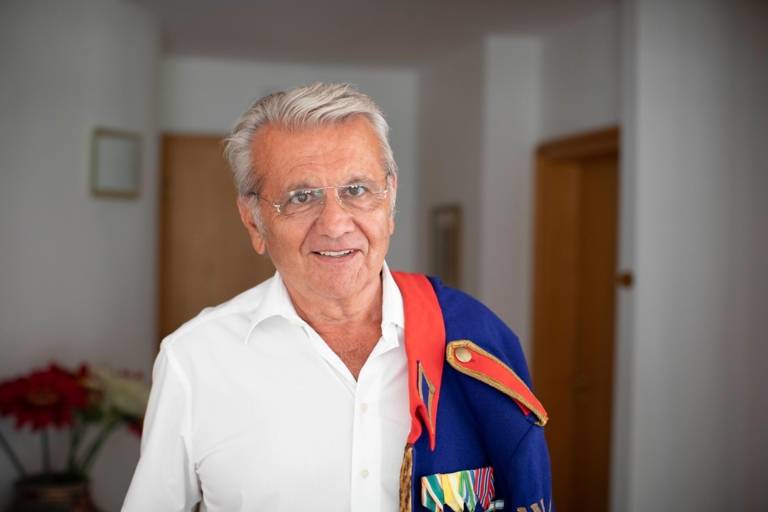 “The greatest gift that you can give is laughter.” 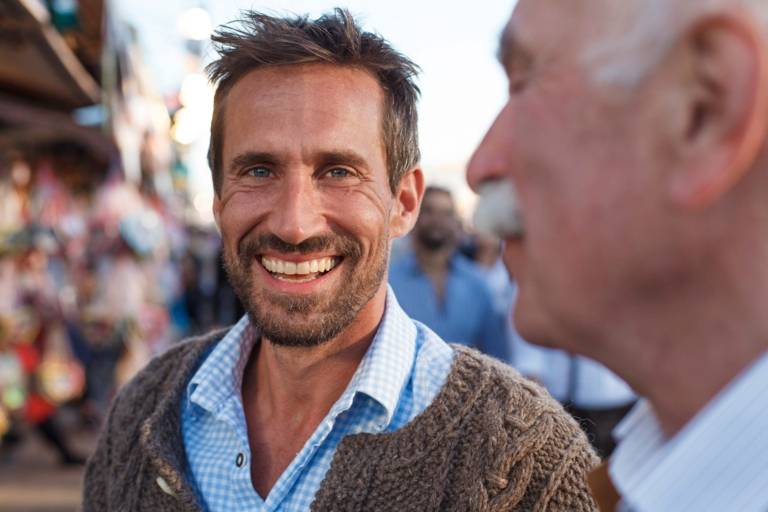