Giesing was formerly a working-class district, and it retains a raw charm to this day – while at the same time offering proof that a certain amount of gentrification can definitely enrich a neighbourhood. How Giesing is maintaining its face during transformation and into the future.

Trains, streams, flowers, evening sunshine – and beer. If you want to combine these five pleasures in a single romantic setting, then Giesing is the place for you. It also has something which probably can’t be scientifically proven, but is certainly worth investigating for yourself: Giesing is the part of the city that enjoys the most beautiful evening light.

That might be because Giesing is located atop a hill, allowing people up here to almost look down a little on the rest of the city. In any case, the light here in the evenings is so stunning that you don’t even need a beer to relax and feel completely content. Although a delicious Giesinger Bräu certainly doesn’t hurt while you’re standing on the Schmederersteg footbridge to enjoy a little trainspotting, for example, surrounded by greenery and yet somehow still in the middle of the city.

Trains, streams, flowers, evening sunshine – and beer. If you want to combine these five pleasures in a single romantic setting, then Giesing is the place for you.

If trains are more of an urban backdrop than you’re looking for, you can go and lose yourself on Mondstrasse (moon street), which runs along the little waterside houses at the foot of the Giesinger Berg hill towards Candidplatz (square) – and is every bit as romantic as its name suggests. This area is sometimes referred to as “little Venice”; water certainly makes up a large part of Giesing's charm. The neighbourhood extends down the hill as far as the Isar river.

Here, somewhat hidden between the banks of the Isar river and the famous Schyrenbad open-air swimming pool, is where Rosengarten park lies – not exclusively a spring attraction, but undeniably special at that time of year. The magnolia trees are so large, lush and varied that you find yourself longing to secretly spend all night on the grass during their short blooming period, so you can gaze up uninterrupted and not miss a moment of the breathtaking flowers.

Anyone interested in Giesing in 2021 should also know the story of the “Uhrmacherhäusl” (watchmaker’s cottage). It’s a crazy tale of gentrification, which sometimes happens in strange ways in Munich as well. Built around 1840, the Uhrmacherhäusl had stood for a long time within a listed workers’ settlement in the Obergiesing area. When the watchmaker died in 2016, the property passed to a community of heirs, who in turn sold it to an investor.

One day in September 2017, the residents of Grasstrasse, on which the house was located, heard the unpleasant sound of an excavator. A resident ran to the house, stopped the excavator that had just started to nudge the building, and called the police. The excavator operator was forced to leave because he did not have a permit.

A few days later, more noises were heard – and this time, the police weren’t quick enough. In less than ten minutes the excavator had reduced the house to rubble and its operator had fled. There are many corners of Giesing where you will not only find the grotesque impact of gentrification, but also devoted residents who are willing to fight tooth and nail to hold on to their homes – or at least try to.

The cobblestones in this part of the neighbourhood shine especially beautifully and the flowers on the little balconies almost look like they’re part of a film set.

For almost four years, the gap in the row of houses where the Uhrmacherhäusl once stood has been provisionally covered up, with the dandelion-overgrown site serving as a monument to the pride of the people of Giesing, and a reminder that this neighbourhood will not allow its roots to be ripped out without a fight. The cobblestones in this part of the neighbourhood shine especially beautifully and the flowers on the little balconies almost look like they’re part of a film set.

The district is also within easy walking distance of everything you could want to get to – to eat, drink or simply sit in the sun. As well as being the part of the city with the most rustic Boazn (local pubs), Giesing also boasts good restaurants and cafés, not to mention interesting bars and taverns.

The Giesinger Garten tavern, with its shady chestnut trees, is the ideal place to sit a while in comfort, and traditional Bavarian-Greek restaurant Lucullus is a must-see for tourist reasons if nothing else. Or if you’re after the best doner kebabs in the city, head to trendy street food vendor Türkitch, which now has several branches throughout the city. In the evening, it’s time to go to the Boazn, of course, or you could order a vodka and raspberry slushie at the bar and then head to the Charlie club. Have we forgotten anything?

Yes of course – there’s something else we need to mention about Giesing. Football. The sixth pleasure that is absolutely part of the romance of Giesing. Giesing is also the area of Munich where the world-renowned Grünwald Stadium stands, which should impress even non-football fans. Built in 1911, it is better known locally as the “Sechzgerstadion” because it is the home grounds of the Sechzger, or Sixties. The district is also home to the Löwen (the Lions), a club established in Munich in 1860 and something of an underdog compared to the high-flying Bayern Munich. The team was once pretty good, but is these days relegated to the 3rd division and, after various trials and tribulations, now belongs to a Jordanian businessman.

Bayern Munich and the Löwen played their league matches in this stadium for decades. Fans still long for that atmosphere to this day.

Another one of those stories of a rise and fall, moving in and moving out – and moving in again. Bayern Munich and the Löwen played their league matches in this stadium for decades. Fans still long for that atmosphere to this day. And still today, cheerful, singing crowds of people clad in blue regularly make their way from the surrounding Boazn all over the district to the stadium. From looking at these fans, it’s hard to believe that the team they support is in the 3rd division. And that’s just as it should be. Heads high and carry on. As long as Giesing is still here.

The power of culture

The charm of the casual 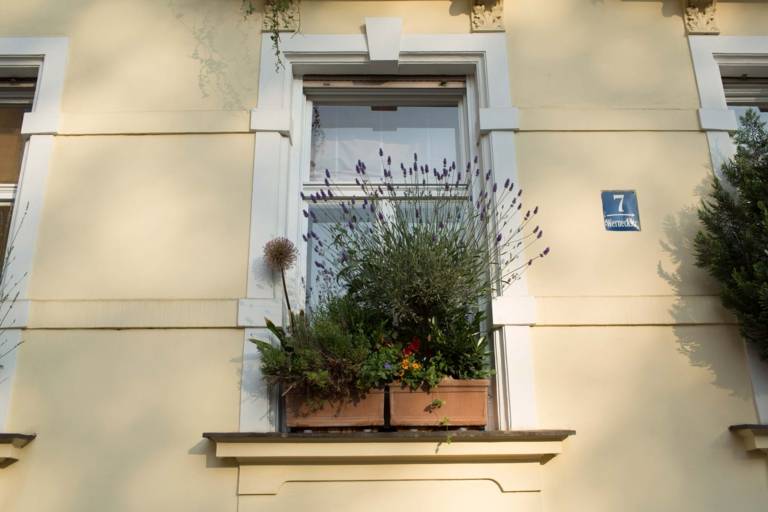 Is it really all Munich?

Munich's districts could not be more different. Find out here how they came to be and which district suits you best. With Test!