Look behind the scenes

An area normally reserved for professional footballers and coaches: experience the atmosphere in the players’ area of the Allianz Arena during an arena tour!

When you see it lit up in the red of FC Bayern at night, the football stadium looks a little bit like a spaceship that has just landed from a distant star. Over 300,000 LEDs illuminate the diamond-shaped membranes on Munich’s modern-day landmark. During international matches with the German national team the arena is lit up in white.

A guided tour of the arena, providing glimpses of the players’ dressing rooms and the tunnel, is a truly special experience on match-free days. Here you have the chance to look behind the scenes and see some of the most famous features of this incredible stadium. You will also learn some interesting facts about the Allianz Arena’s unique design.

Visitors can also combine their tour with a trip to the FC Bayern museum: Unlike more traditional football museums, the FC Bayern Erlebniswelt (FC Bayern world of experience) not only includes countless incredible items, including trophies, shoes and kits worn by major Bayern stars of past and present, it also gives visitors the chance to experience the emotions felt during some of the key moments in the club’s history using cutting-edge exhibition technology.

The arena tour can also be booked as part of a VIP package, complete with champagne reception and a visit to the box, the edge of the pitch itself and the bench. On FC Bayern match days, ticket holders are able to take part in an exclusive match day tour.

Wheelchair users and visitors with limited mobility can explore the arena in a specially designed tour. Groups also have the option of booking the tour as a “kick tour”, where they can test out their goal-scoring ability against a real-life replica of the goal board used on the famous German football show “Aktuelle Sportstudio”. For groups of children keen to explore the exciting world of football stars, the kids tour including goal practice is ideal.

Good to know: With the Munich Card you will receive 2 Euro discount on the Combiticket: FC Bayern Erlebniswelt & Arena Tour. The public transport is included. Further information can be found here.

Allianz Arena, Erlebniswelt, Säbener Straße, Olympiastadion: everything you need to know about football in Munich.

A look behind the scenes 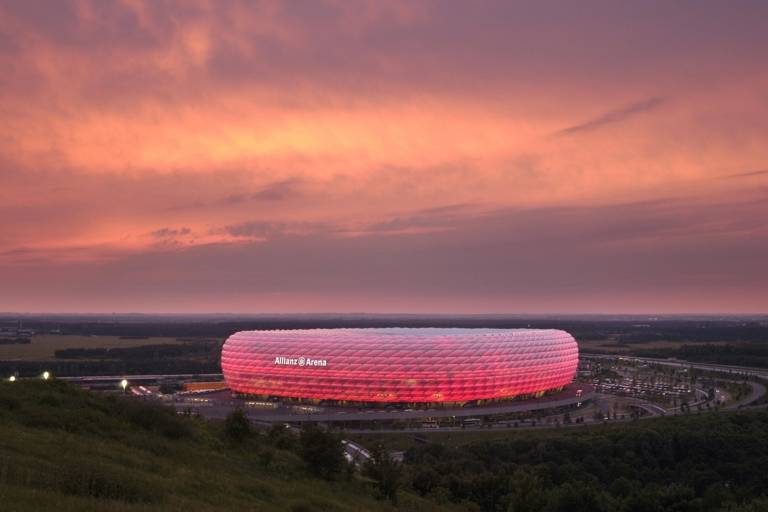 High up on the roof of the stadium

Begin your climb over the northern corner and along the world-famous track to the roof of the Olympiastadion.